Hmm… probably it’d been better if I had written my experience down in a diary or something while I’m travelling, somehow it just felt different when I’m trying to write this trying to jog back my memories weeks ago. But anyway, here’s my recollection of my travels.

So, basically, the whole journey revolves around Phonm Penh, Kompong Thom and Siem Reap. And that noon of 13 May, there’s quite a lot of small bumps, especially the fact that I’m late, turning back half way on the road to get my forgotten camera and rushing into checking in… but still I manage to get to the Low Cost Carrier Terminal (LCCT) on time :). So the whole troupe consist of myself, Yuan Hui (my colleague), his boyfriend, his brother and five of her friends. 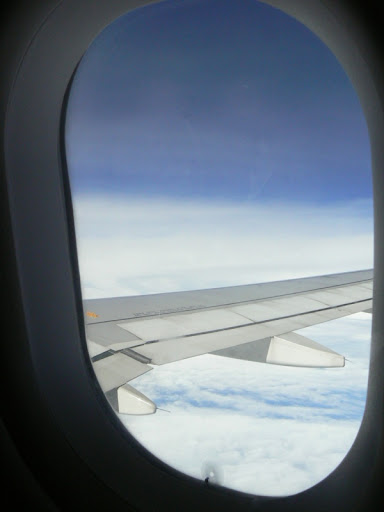 Fast forward through the slightly delayed flight due to heavy rain, it’s pretty exhilarating in the Airbus really :). Watching the plane going through high altitude and the beautiful clouds that surrounds us. Immersing myself in such scenery just felt very surreal. And after two hours of awe-inspiring clouds, we reached our first stop, Phnom Penh, the capital of Cambodia. The first taste of Phnom Penh is probably a very contrasting one, really, as the Phonm Penh International Airport was painted with such vibrant colours and as soon we stepped out and hit the roads, the dull colours of the buildings were more apparent. Throughout the whole city, there were no sky scrappers, no flashy neon signs and advertisement all over. It’s just like a small town in Malaysia, only difference being that it is the capital all right as the buildings were pretty dense. 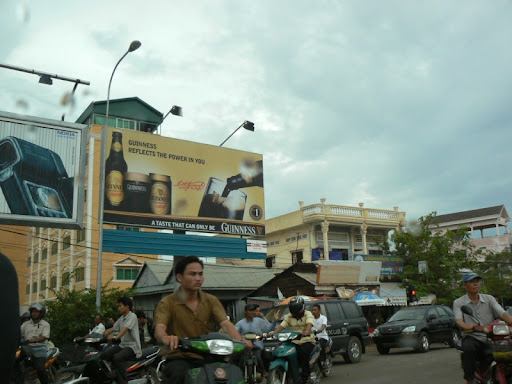 And along the road, we can see a lot of motorbikes (which they called as “moto”s), tuk-tuks (which is a tricycle powered by a motorcycle) and old generation Toyota Camry’s, I mean pretty much close to ALL of cars on the road were Camry’s. And it’s sort of a sight of disbelief when how Cambodian ride their bikes: pretty much all of them does not wear safety helmets, a motorbike carrying as much as four persons (at least I’m pretty sure that I saw three adults on a few motos) and the sheer number of bikes around us. It’s not that I never seen stuff like this (you can see a whole family on a motorbike in some rural areas in Malaysia), but just the number of these Cambodians around you which makes it quite a shocking sight indeed. 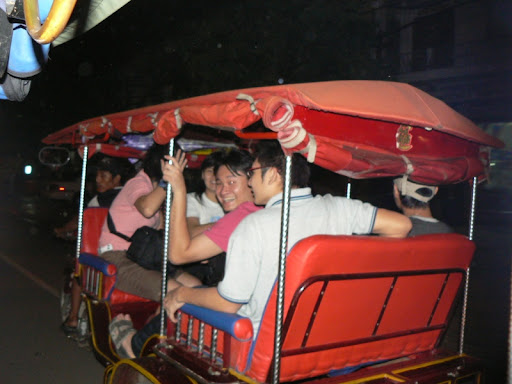 So after we unpacked our briefcases and scatter all wet clothing almost every single inch of flat surface we can find in the room (no thanks to the rain which pretty much soaked most of our luggage, I was lucky that mine was pretty dry when I got it), we got out to have dinner. For one thing, their roads were quite dimly lit. And we took our first ride on a tuk-tuk. As said, the seat for to sit in is basically a cabin which are open by the sides with no real protection other than a pole by the side and a handle on the roof. But for Malaysian it’s nothing-one! 😛 And it’s pretty nice to have the cool breeze blowing around us while it goes at unhurried pace, giving us a lot of time to look our the quiet city of Phonm Penh in the night. 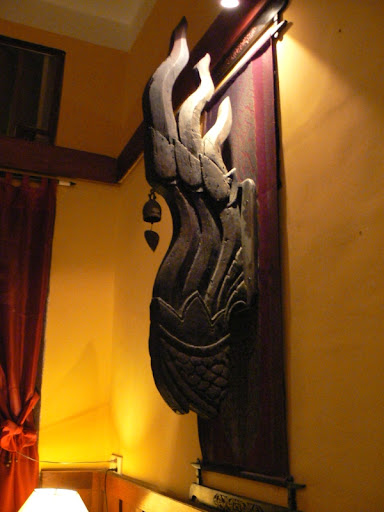 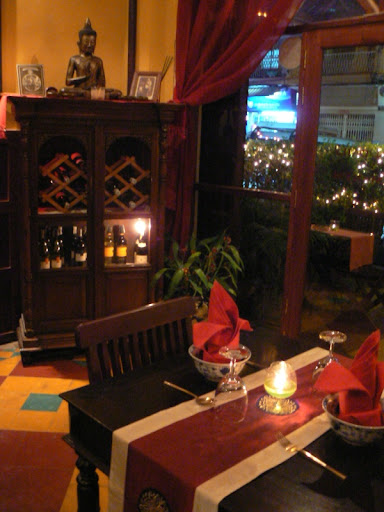 First stop, Lemongrass! That’s the restaurant that we are dining in for the day. What strikes me first is the starking difference between the town we saw just now and the restaurants around here, two words describes it: with class! With all the interior design of local handicrafts and furnitures and orange tinted lighting, it’s just pretty beyond words. OK, but the catch came as soon as the menu comes, the prices were pretty jaw dropping as well. For one thing, Cambodian use green backs (read: US dollars) and when you see the menu with prices more than US$3 and with our currency exchange rate at RM3.45 for one dollar, that’s my first traveller shock. 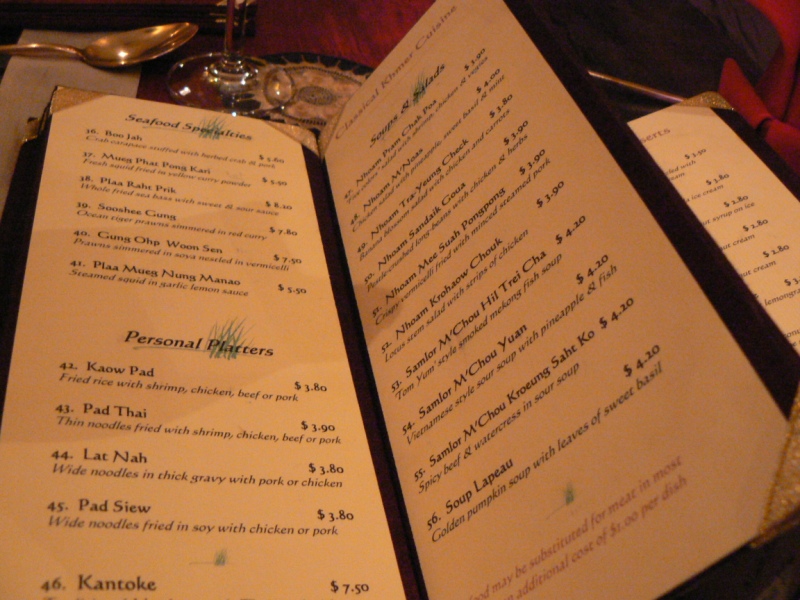 Moral of the story: When you are travelling, don’t think about exchange rates. (i.e. Treat a dollar there like a dollar back home) 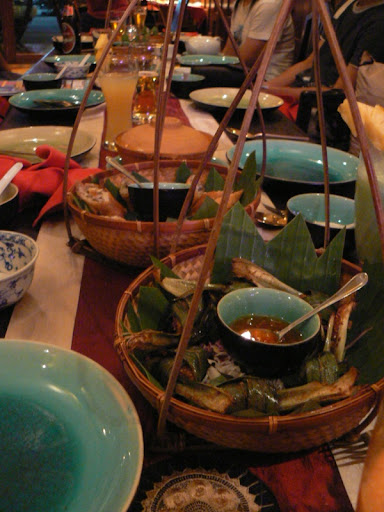 But putting that aside to the back of my brain, the food’s very tasty :D. And what’s in the menu as fruit shakes are actually ice blended drinks made with fresh fruits. And it’s the same throughout Cambodia, and at around US$1 per pop, there’s no reason why not to indulge myself with one of those for every meal. Too bad that I’m bad at alcohol, because their local beer (Angkor beer) is selling almost the same price as water! Like, around US$0.50 for a can of beer and just slightly more than a dollar for a large bottle, it’s more than half the price than what we get in Malaysia (no thanks to Malaysia sin taxes :p).

Anyway, to describe their food, I can only say that it’s pretty… umm, Asian? I mean, Cambodian food doesn’t really differ much from the likes of Thailand and Vietnam. But there’s one dish that’s worth mentioning, which I’ll be covering later on. 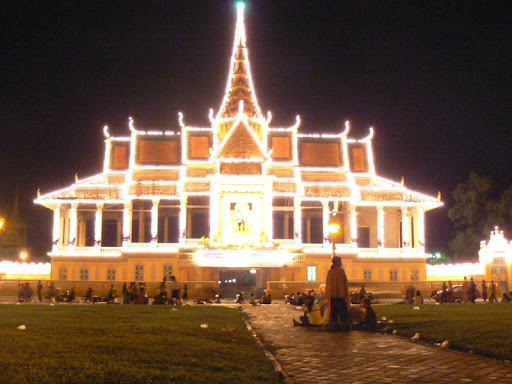 After that, we went to a park next to the Royal Palace, and all I can say about it is… ummm, majestic? I don’t know, they arranged the bulbs around the outlines and making it sparkle in hues of yellow (gold?). And looking around the park, you can see Cambodians were filling up pretty much the whole park, either having a picnic or enjoying themselves. According to the brother of Yuan Hui’s boyfriend who guided us around that night (he’s working at Cambodia at the moment), it seemed that gathering around the park and enjoying themselves were a popular past time for the locals. So we were taking our time taking our photo shots. Too bad I didn’t bring along my tripod, so I didn’t really took much shots here. 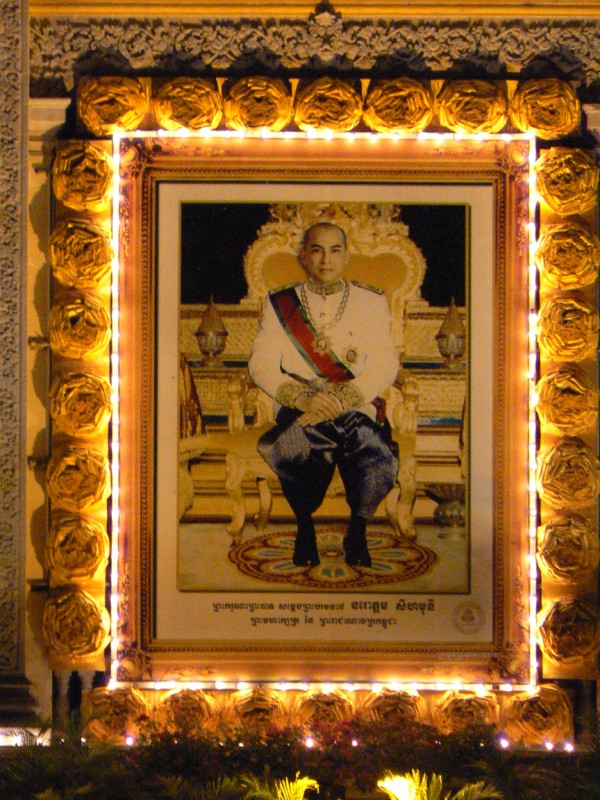 And oh yea, pretty much a lot of places in Cambodia, you can see big photo shots of his Highness of Cambodia. I mean, in sizes of a billboard with detailed frame around it. Hmm… I did wonder about the celebrity like treatment to his photos.

Heading back home, it started to drizzle. The tuk-tuk driver quickly stopped his bike and helped us to pull down the vinyl covers at the sides of the cabin and so we didn’t need to share the same fate as our luggage…