Oh wait, it’s been more than six months since the last My Pastel Coloured Rainbow post? Wow… seems like the blogging habit is starting to wear off from me. For one I’m starting to spend time away from the computer, go out and explore new activities. And when I have something to blog about, they are short snippets of thoughts that I ended up posting on Twitter and Facebook instead of writing short posts that I used to label them as “impromptu posts”. We’ll get to the meats and potatoes of what has happened in the year 2012 in a second.

At the same time, I acknowledge the fact that the long hiatus is necessary for me to get out from my usual routine and gain fresh perspective in life. Without interaction with a broader community, I believe that I’m limited to a smaller mental sandbox to work with and not knowing what actions could potentially affect other people’s lives. Taking positive action to make the world a better place (clichéd as it sounds) would never be possible without community involvement (well, at least communities that I associate with).

To me, this is what 2012 means to me — and having “network” as my operating keyword and theme sets the perfect tone to what I’ve acomplished for 2012. With that in mind, let’s get on to the highlights of 2012. 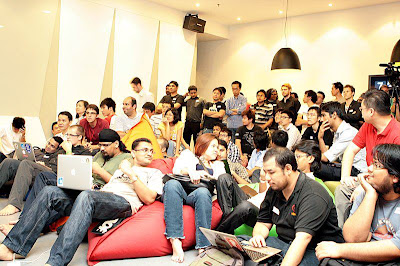 Webcamp KL started February with a bang as we couldn’t even fit the 170+ attendees in the Hall of Awesomeness at Mindvalley — it’s a breathtaking testament of a growing community in Malaysia. And throughout the whole year, Wu Han is still the charismatic and diligent organizer and host, Mindvalley being gracious to allow us to use the hall for events and MediaSaya continues to generously livestream the event and post Youtube videos of the talks.

And 2012 is the year of tech meetups, people are stepping up to spawn more meetups and communities — looking back, we now have one meetup group for almost every popular programming language or technology (Python, Node.js, UX, MongoDB, AWS etc.) and even other popular groups like Incitement, Social Innovation Camp, etc. And I have kickstarted OpenCoffeeClub KL as a casual hangout for entrepreneurs (which is now run by Inbaraj from Pixaworks).

With such an explosive development of communities, I believe we are just at the beginning of making something big — that our collective forces, common understanding and desire to grow would see many collaborations among previously disconnected individuals and bringing positive change to the world. As much we would only see the impact these communities create in more than five years time, am excited about the opportunities it brings.

And yes, am starting to push myself out of my comfort zone by doing more talks as well. All of these talks are a labour of love which I find myself spending weeks to prepare the materials and I’m enjoying every minute of making them. Looking forward to do more of them in 2013!

Highlight #2: My New Job at Mindvalley

So in February 2012 I started work as an application developer in Mindvalley. I’d admit that it is a path of least resistance for me back then and also it makes the logistics of preparing for meetups easy for me.

I have to say it’s quite an experience to be there — with great people from different countries working at one place. It’s a workplace full of positive energy and with some of the smartest people from the business side of things. Though I’m still having a couple of snags of trying to fit in and being too self-aware about the fact. Well, for one it’s quite hard for a party-shy introvert to not feel overwhelmed and scared by all the wild parties everyone else seemed to enjoy.

Other than that, am enjoying my work — in fact that it’s the first time that I’m being able to develop a full application on my own, with almost full control over how it is being developed as I’m the sole developer for these projects (though technically speaking I’d say that I force my hand on them as I’m the sole developer for the project). Two projects that I have developed and delivered would be Customer Hugs — a review application for Facebook Pages and a backend server that would power in-app purchases for future Mindvalley mobile apps. 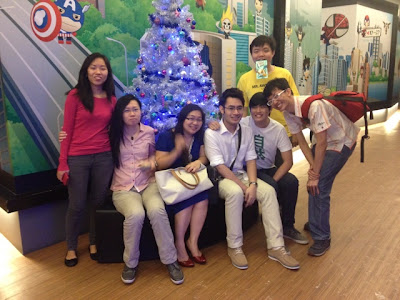 There is one major side effect in being an active participant in meetups — having more friends. With the two mastermind groups, every week is an inspiring week seeing everyone in the group do something and grow in the process, and the weekly discussions often gives me fresh perspective and ideas to work on.

Then there’s the MyCocoaHeads Penang road trip filled with mouth-watering Penang food, music, stories and laughter — and how a road trip gives an opportunity to know people on a more personal level, compared to the measly five minutes you get to interact with them during monthly meetups. Looking forward to the next time we’re going to plan another one.

What is the least expected is what started as a group chat of six people planning a karaoke outing ended up becoming close friends. We ended up hanging out more for karaoke sessions, music performances and even going on for a road trip together. I now call the group The HAPPY Crew and go figure the gay-to-straight people ratio of the group ;p. A lot of cross pollination of different circle of friends are happening almost every single outing we had, so it’s almost like we are having an extended family. The decision to be honest and open about my sexuality wouldn’t have been possible without such loving support I received from the group for the past six months.

This is the hardest for me to write and confront at the moment, knowing how recent this had been. To summarize the whole situation, there’s a small dash of romance in this life which unfortunately didn’t hold up in the end.

It’s a tale of a lover who had a strong crush that is not reciprocated — making his best effort to care and pour affections to win him over. As time goes by, the beloved slowly warms up to him and moved by all the affections that is being showered on him. Months goes by, the beloved caves in and decided to give it a shot, but unfortunately the resolve is short-lived as events unfolded onto the persistent lover that strongly reminded the beloved why he rejected the lover in the first place.

And so, it stalled and they didn’t get to be together… at least that’s the development of the story till now.

Being on the receiving end of affections, this whole situation brings up a lot of new emotions and more questions for me to answer when it comes to what I wanted in a relationship. Questions like “should reciprocation should be equal for a relationship to work?”, “How to deal with incompatibilities in sexual needs and views?”, “How much one could settle for when it comes to lifestyle decisions and differences?”.. much of which I’ve pondered but reality and my subconscious reactions doesn’t quite match up to my logical ideals.

So what I got myself into is a bit of a mess: knowing that I miss him yet I don’t like him strongly enough to overlook his flaws and my logical reasons not wanting to be with him.

Well, that’s something that I would need to sort out — after all, I have unknowingly committed to the decision of wanting a romantic and lifelong partner since the coming-out post is written. As I was writing this, I’m in the middle of packing up my stuff in preparation to move in with my sister’s place — which marks a series of life changes that am looking forward to for the year.

One of the planned activity that I’m looking forward the most would be the upcoming World Domination Summit 2013 right after Independence Day (5 July). Main reason I’m looking forward and ecstatic about it? I finally get to meet Pamela Slim in person! This plan came about early last year when she introduce a whole group of South East Asian readers in a Twitter conversation and the idea of having the group going to World Domination Summit sounds like an awesome idea for an adventure. A year later, I booked tickets for WDS2013 without hesitation… and am glad that I’ll be going together with a fellow Malaysian, Yongjue whom I knew through the $100 Change Programme.

On the other hand, I decided to ratchet down my community effort this year — though more accurately I will not be commiting my energies beyond the core meetup groups that I’ve volunteered for since the last year (which would be Webcamp KL, Educamp KL, MyCocoaHeads, Python User Group Malaysia and two WCKL mastermind groups). And having worked out my schedule, am feeling pretty satisfied with this configuration as it allows me sufficient personal time with the feeling of overcommitting myself. After all, I need some time for romantic pursuits 😛 (more on that later). That being said, I’m starting yet another bi-weekly meetup called the “Unofficial Webcamp KL Tabletop Gamers”, which is a bi-weekly board-gamer meetup — which gave me the perfect excuse to indulge in my new-found hobby.

Speaking of romantic pursuits, I’m indeed making it a priority at this stage in life right now. Having focused and built a solid foundation in life for the past eight years, I don’t think it’s something that I should be leaving to chance. After all, I believe what got me into a continuous cycle of falling for straight guys (well, straight colleagues, to be exact) can be attributed to my lack of community participation in the past. Either that, or I’m just rationalizing my desperation after reaching my big 3-O’s.

Last but not least, the one part in life that I’m the most comfortable in and yet being totally uncomfortable thinking deeply about — my career path. I’m at the stage where I’m having my wavering doubts and wondering whether is it time for me to consider my options. After all, my medium term goal is to own a lifestyle business and I’m starting to feel the calling of making this happen. At the same time, I’d be honest that I’d much rather have a smooth transition towards achieving the goal instead of a drastic leap. How would my plans turn out this year? We’ll see what I’ll be doing this year.

Wrapping up: Three Guiding Keywords/Themes for 2013 Following last year’s tradition, instead of setting goals I’m going for the three words framework used by Chris Brogan. I was first exposed to that concept by Jonathan Field’s post “Oh The Places You Will Go”. I find this to be a more holistic approach and doesn’t feel constrained by it.

The best way to wrap this up is this powerful sentence from my 2011 review — which I still think is the modus operandi of my life:

The ultimate prize I’m now pursuing is career that I enjoy and excel in, build a community of friends and to be engaged with a lifelong romantic partner to share my joys with.

With that, Seh Hui signing out, DFTBA (Don’t forget to be awesome)!